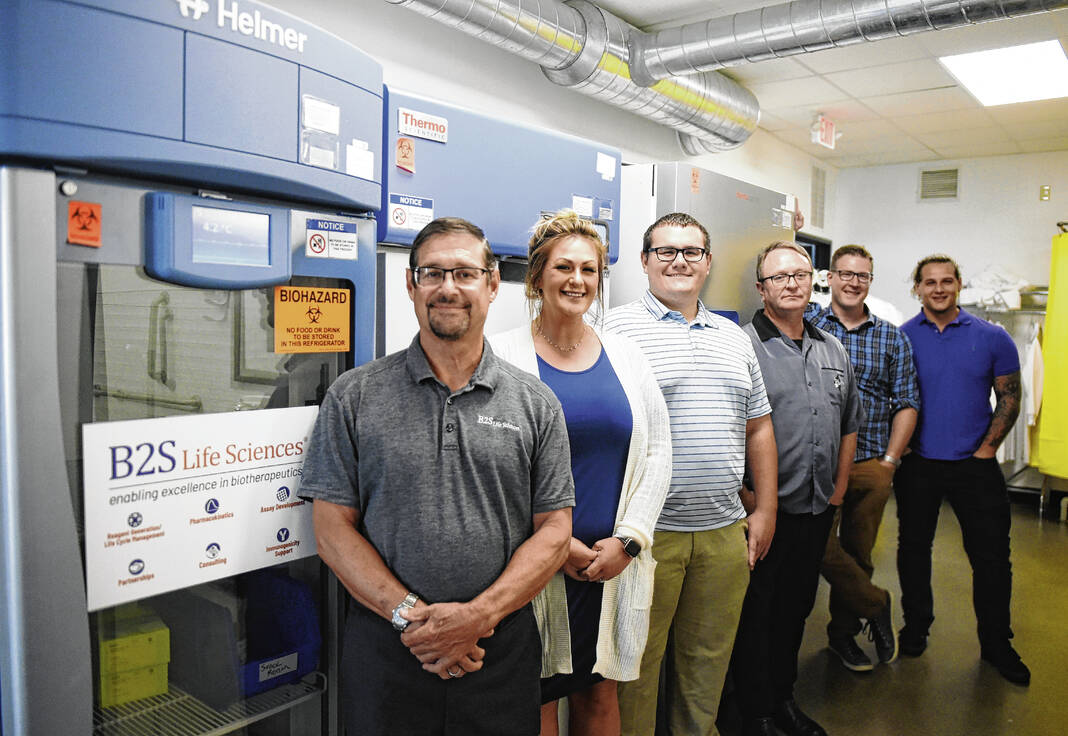 An emerging field of pharmaceuticals is succeeding in eradicating cancers, solving neurological complexities and stopping the spread of infectious diseases.

Companies around the world are harnessing biotherapies – therapies derived from biological sources – to tackle some of the most daunting medical challenges facing the world.

And a key piece of critical innovation is being created at a small facility in downtown Franklin.

“It’s about getting new, innovative medicines to patients as soon as possible,” said Ron Bowsher, partner and CSO of B2S Life Sciences. “It puts the knowledge, information and decision in the hands of the customer.”

B2S Life Sciences, a locally based bioscience company, has developed a unique system to help track and manage key components in the development of new biotherapies. Their proprietary Lifecycle Plus Management System gives companies across the industry the ability to monitor critical reagents – critical substances used to determine the safety and effectiveness of drug trials.

By giving drug developers a clear picture of the availability and status of these substances, B2S helps new treatments reach patients as quickly as possible.

“We are very proud to be able to do this from Franklin,” said Aleks Davis, partner and CEO of B2S. “For the most part, everything we did ourselves. The concept, the execution of it, means a lot to us. It is considered a valuable tool that the global pharmaceutical industry can access and use. »

Biotherapeutics are products in which developers harness living cells to make or modify proteins to create therapies, according to the International Federation of Pharmaceutical Manufacturers and Associations. Insulin, used by diabetics to regulate blood sugar, was the first modern drug produced using biotechnological methods.

Since then, biotherapeutic drugs have been developed and licensed to treat conditions including cancer, heart disease, multiple sclerosis, anemia and rheumatoid arthritis, according to the federation.

Today, approximately 25% of new drug approvals are biotherapeutics. These drugs could not be developed without critical reagents.

When developing drugs, regulators establish steps that must be followed closely.

“In this process, there’s a need to generate data that supports safety and efficacy — whether it works or not,” Davis said. “Ultimately, that’s what regulators like the (Food and Drug Administration) want to determine.”

This work is central to B2S. The company, founded in 2016, provides pharmaceutical and diagnostic biological reagents, which are used to test chemical reactions. The data from these tests helps the pharmaceutical industry develop drugs.

“These reagents are something you use in the context of this test that ensures that what you’re measuring is sensitive as it needs to be and specific enough for what it needs to be,” Davis said. “These critical reagents are crucial for these tests.”

Given the importance of these reagents for drug testing, it is imperative that companies know how many they have and how many are available when planning clinical trials.

“They want to make sure there’s no delay on anything, and you definitely don’t want that delay to run out of a vial and it’s going to take six months to do that,” Davis said. .

But until now, no electronic inventory management system existed to track the inventory and expiration date of these substances. Trading systems within individual companies were common, but nothing was industry-wide, Bowsher said.

From the start, B2S managers understood the need for such a system. Work on such a database began in 2016, with a pilot test for a client in 2020, then multiple tests and improvements over time. Gradually, they rolled it out to other customers, Davis said.

Customers can enter the system and see how many reagents they have. The portal includes easy-to-identify trackers of how much stuff they have — almost like a car’s gas gauge.

“We have customers all over the world. Instead of picking up the phone and saying, ‘We have 16 samples here,’ we created this system where they can not only get the information, but also manage it,” Bowsher said.

The process consists of three components: the software system developed by B2S to manage the critical reagents, freezers to store these reagents and tests to monitor the characteristics of the reagents. All of this is done in Franklin.

“The system allows its globalization and ease. But having the ability to manage it all, in addition to having the analytics capabilities to run the tests, is what brings it all together,” Davis said.

At the end of July, a paper submitted by B2S for peer review was accepted and published in the journal Bioanalysis, describing the system and its importance.

B2S is a small company – they just hired their 50th employee – without the marketing budget to raise awareness of the system in the industry. So it was vital to be included in a peer-reviewed journal, Bowsher said.

The comments they have received are almost all positive.

“He was greeted with astonishment. They can’t believe it. And what they really can’t believe is that this innovation is happening in Franklin, Indiana,” Bowsher said. “It’s not happening on the east coast or the west coast, it’s here in Indiana.”

‘India’Complex driving environments may be a playground for Continental to develop autonomous driving technologies’, Auto News