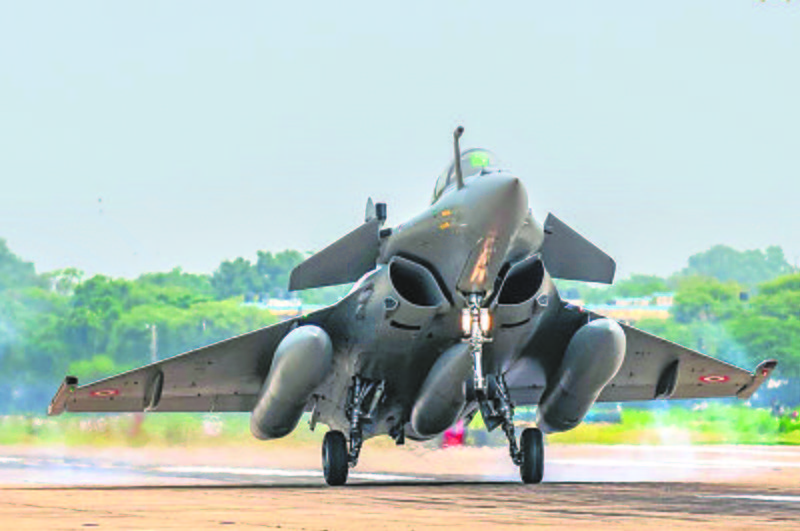 Quad to boost India to operations across the board: The Tribune India

While the clouds of war over Ukraine over the NATO-Russia standoff seem to have lifted somewhat (and saved India from blushing at having to take sides, although it must abstain during a crucial UN debate on the issue), there seems to be a build-up in Asia-Pacific. India’s strategic role in the evolution of the Indo-Pacific quad is becoming substantial day by day. As the Quad took on its legitimate military dimension, the new phraseology of “all domain operations” would become even more applicable in the context of expanded IAF air operations.

Traditionally, the world’s major power projection players have tended to use jargon to offset real-world capabilities. But we may be on the verge of discovering revolutionary combat concepts. All domains would encompass the air actions of air forces on land, at sea, in the air, in space and in cyberspace – with the integration and sharing of information in all operations being enabled by computing at high speed at almost the speed of light.

This would be an ideal opportunity for India to sit at the high table of international warfare, with distinct advantages over adversaries such as China and Pakistan.

The seamless integration of operations into areas unattainable by adversaries should also be our goal, as Admiral Christopher W. Grady, US Vice Chairman of the Joint Chiefs of Staff, recently touted. While it could by no means be expected to be a cakewalk, the war would continue to be as messy and unpredictable as ever. In the Indian context, operations in all domains would necessarily involve a “two-front war” against the specter of threat in our neighborhood.

Timing in regards to the IAF is also crucial, with new technologies and force increases being on the anvil. This would of course include the Rafale, the Tejas and its derivatives, the SU-30 and MiG-29 upgrades and the platform that would win the 126 MMRCA flyoff. Add to that the whole panoply of modern carriers and helicopters, such as Super Hercules, C-47 Chinooks, Apache AH-64s, C17 Globe Masters, force multipliers like aerial tankers and AWACS radars/ AEW and Aerostat, all linked by secure communications and data links.

Indian Army, Navy, Coast Guard, Paramilitary and DGCA air assets such as radars and all types of AD guns and missiles should be incorporated into our integration in all domains through optimal C4 I2 engineering.

We’ve dabbled with a National C4 I2 project for a few years now, even though it failed to fit properly into the system. Once the required architecture is in place and the continued exercise and operationalization of it, our national expertise in all areas would be optimized.

Ultimately, the IAF should look at aerial platforms similar to the JSF F35, which have already demonstrated the ability to share operational data from various locations such as Texas, Hawaii and Australia.

In the case of India, ISRO is expected to be fully integrated into the C4 I2 defense architecture, with satellite communications and space imaging sensors and search and rescue elements including Combat SAR being valuable combat assets.

It was heartening to see the Indian Tejas on display at the Singapore Air Show along with other state-of-the-art aircraft, including the F35. Participation in such forums would allow the IAF to learn the ropes in cyber, electronic warfare, sensor and big data fusion capabilities, which form the backbone of warfare in all fields. .

Knowledge of such a modern combat environment would allow our military commanders to act quickly and exploit the enemy’s OODA (Observe, Orient, Decide, Act) loop. The post-pandemic scenario would pave the way for considerable commercial development around legacy aircraft systems and command and control software and hardware.

The real challenge is to have systems and platforms that can collect the required operational data and process and analyze it appropriately and deliver it quickly to a multitude of subscribers in the loop.

Lots of upgrading and renovation would be needed. There would be benefits to be gained if the source codes are indigenous and the government’s Atmanirbharta program would play an important role, especially with the brainpower residing in our IITs and other higher learning institutions in the civil and civil sectors. defense.

In the early days, when the IAF considered upgrades, integrators such as the 1553 data bus played an important role in allowing different weapon subsystems to communicate with each other. The integration of the Matra Magic missile on the MiG 21 Bis is a classic example of success. This approach would bear fruit even in the future of all areas, especially for developing countries like ours, because we

have considerable “legacy hardware” in our inventory.

Our expertise in digitizing analog systems, like digitizing troposcatter communication hubs, for example, would pay rich dividends in the future. Entities such as the Software Development Institute in Bangalore (which is credited with developing software for the Sukhoi-30) would play a leading role in this regard.

Thus, we would retain our legacy equipment and integrate it optimally into our state-of-the-art national and sub-service C4 I2 architecture to achieve seamless tactical and operational mosaics.

Another area to facilitate expertise in all areas is that of international air exercises and other military exercises. We already participate in a multitude of such exercises, including the Red Flag in Alaska.

Demonstration of concepts in all areas and integration with other friendly forces must be incorporated into these exercise parameters so that gaps in native engineering capabilities, if any, can be appropriately addressed in learning from the best systems and practices of our international partners. Furthermore, warfare in all fields must become a standard feature of the research and development programs of our academic service institutions.