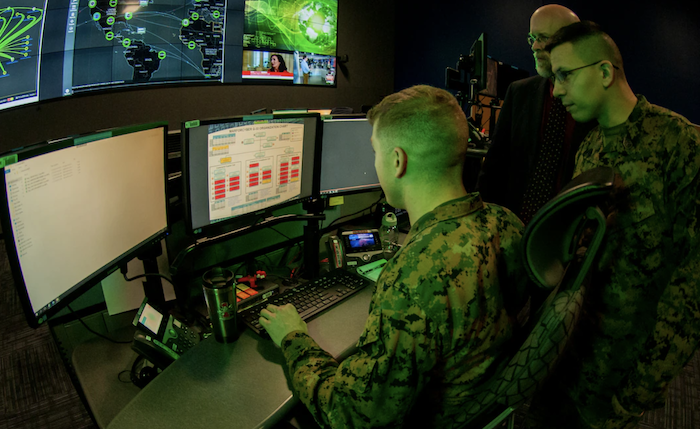 The development of cyber warfare in the United States – part 5

In December 2021, the US Navy announced the authorization of a supplemental transaction agreement with Advanced Technology International (ATI) to manage the Information Warfare Research Program Part Two (IWRP 2).

As part of the consortium management of IWRP 2 activities, ATI will provide the mechanism for Naval Information Warfare Command (NAVWAR) to reach a wide range of traditional and non-traditional contractors across the defense in various areas of information warfare technology to meet specific IT challenges through prototyping (i.e. creating a prototype, the first example of a product that a company intends to develop thereafter).

In February 2022, the US Marine Corps issued a statement advising that it was seeking to develop an intelligence tool to analyze public online threat information. The announcement says the Marine Corps is modernizing its forces and composition to better prepare for information operations and trying to track adversaries who use large amounts of publicly shared information through intelligence gathering, as well as information and cyber operations to gain an advantage.

The platform is not designed to directly counter these capabilities, but will provide analytics and cyber intelligence to reduce the effectiveness of enemy operations. The system must also follow US Cyber ​​Command’s Joint Cyber ​​Warfare Architecture (JCWA).

Another key task is building a military research and development ecosystem to provide flexible software support. As the U.S. military increasingly relies on software for automation and operational decision-making and execution, there is an urgent need to improve the ability to rapidly produce secure and resilient software in order to retain a powerful competitive advantage.

In an effort to change the current situation of heavy reliance on contractors and improve wartime contingency and emergency mobilization capabilities, the U.S. Army has begun to focus on developing in-house software teams and the use of in-house programmers to build mission execution capabilities faster.

As industry software experts continue to support the internal work of the U.S. military, each of the network components serving U.S. Cyber ​​Command organizes teams of programmers, engineers, and tool developers .

These people build rapid prototypes and new solutions; extend existing platforms; conduct vulnerability research and malware scans; testing and evaluating software; supporting Cyber ​​Mission Force operations; and provide a wide range of their services in cyberspace and experience vulnerability. These services continue to gain support from contractors for efforts to build larger platforms, but they also recognize the urgent need for their personnel to perform related mission functions more quickly.

US Cyber ​​Command is seeking more developers to provide direct support to various cyber teams, including: combat mission teams conducting the most offensive cyber operations on behalf of the commands; engagement with States to defend teams operating in transnational missions; and dispatching cyber teams to execute cyber frequency and ground radio frequency operations with a tactical focus to support ground commanders.

Army Cyber ​​Command said internal software and tool builders were more flexible and had the experience to give commanders more options than in the past, allowing the Command to rely less on the industry to accomplish its mission. Intelligence is most effectively instructed in the hands of developers, who can test capabilities in mission-relevant environments that may be challenging for external partners.

US Naval Cyber ​​Command provided developers with Naval Sea Systems Command requirements to determine how adversaries could undermine shipboard systems, and within a week developers identified potential cyber vulnerabilities and recommended fixes and fixes. fixes. The US Naval Cyber ​​Command said the Navy’s cyber workforce has already grown and is mature, but not easily replicable in the acquisition process. While contractors provide critical support across DOD, operational tempo and effective integration require government employees to lead and push for it. Operations personnel have demonstrated the ability to identify capability gaps during operations, develop solutions and deliver capabilities, changing operational solutions within 24 hours.

The US Naval Cyber ​​Command said industry is an important partner because it provides experience and scales of actionable experience that cannot be generated within the Navy. However, a rapid and agile development process from requirements generation/modification to testing and acceptance requires integration with internal operational elements with tight synchronization. If all capability development were outsourced to industry, the US Naval Cyber ​​Command would lose the ability to lay the foundation for the professional development and growth of government employees into more advanced technical and leadership positions.

The Marine Corps combines developers, analysts, and combatants to achieve the best mission results, emphasizing that there is no fixed relationship between developers and combatants, but rather flexibility of applicability.

The US Air Force conducts its own software development projects related to its set of cyber missions, such as the 67th Cyberspace Wing-16th Air Force (based in San Antonio-Lackland) which is testing the “software factory as a service”, renting commercial surfaces for software factories to provide cyber development tools to strengthen and reinforce possible missions. Commander Col. Jeffrey A. Phillips said the 90th Cyber ​​Operations Squadron, and part of the 318th Cyberspace Operations Group, is a unit focused on developing these capabilities.

The Cyber ​​Protection Team (CPT) and Combat Mission Team (CMT) work closely together to determine what capabilities they need. The 67th Cyberspace Wing has moved away from waterfall software development, adopting an integrated DevSecOps approach that generates capabilities faster. He created what are known as “cyber firing chambers” with capability developers and CPT and CMT personnel. 25th Space Range Squadron personnel are in the same location for development of the DevSecOps capability tool.

Professor Giancarlo Elia Valori is a world-renowned Italian economist and international relations expert, who is the chairman of the International World Group. In 1995, the Hebrew University of Jerusalem dedicated the Giancarlo Elia Valori Chair of Peace and Regional Cooperation. Professor Valori also holds chairs in peace studies at Yeshiva University in New York and Peking University in China. Among his many honors from countries and institutions around the world, Professor Valori is Honorable of the Academy of Sciences of the Institute of France, as well as Knight Grand Cross and Knight of Labor of the Italian Republic.

An introduction to binary differentiation for ethical hackers