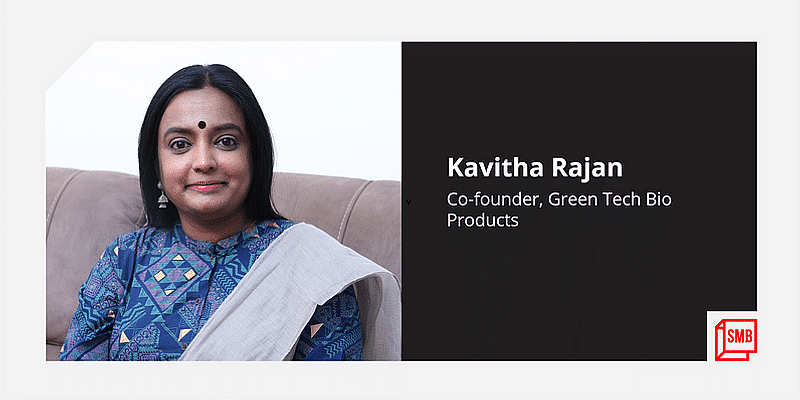 It was the year 2016. Kavitha Rajan was a software engineer based in Coimbatore, working on a few digital marketing projects. Little did she know that she would one day shift gears from software to manufacturing.

Kavitha’s father, VS Veerasawami, ran a wall putty manufacturing business in the city. The indiscriminate use of plastic and the damage it causes to the environment bothers him a lot. So he started researching how alternative eco-friendly products could be developed to replace plastic.

Two years of research led him to experiment with several raw materials, such as polyvinyl alcohol (PVA), processed starch, derivatives of vegetable oils and other non-plastic additives. He almost converted his office into a laboratory where he conducted his experiments. He modified PVA and industrial starch and added certain non-plastic additives, thus creating a material that could be pelletized, blow molded and made into bags.

Biodegradable pellets are water soluble and can be blown into films and bags using the extrusion process. The pellets have a two-year shelf life and can be made into transparent and colored bags.

Unfortunately, at this momentous stage of his life, Veeraswami was diagnosed with stage 4 cancer. But that did not deter him and he went ahead and started his business Green technology organic products in 2018 to manufacture and sell water-soluble biodegradable bags.

The company’s films and bags are used in all industries as a packaging material. Although the business grew slowly, Veeraswami managed to land a few orders until 2021 when he succumbed to his illness.

VERSUS. Veeraswami with his daughter Kavitha Rajan

pick up the pieces

Although her father’s death was a blow, Kavitha remained unfazed. In fact, she decided to take up the challenge and move Veeraswami’s business forward.

Kavitha was extremely close to her father and had occasionally helped him with his business, especially in communicating with potential clients, as he was not fluent in English. He also used to discuss with his daughter the formulations he had developed.

When Veeraswami passed away, the family faced the big question of who would take his passion project forward.

“I was in a dilemma as to whether I should take over this (his father’s business) full time. I didn’t know how I was going to handle the manufacturing part because I come from a background in software engineering. But I saw dad lead the project until the end of his life,” says Kavitha.

Diving into the bag business

Once Kavitha realized this, she had her answer. She decided to take over the business and started it. Under Kavitha, the company also started making cloth bags.

Sold under the “GreenPlast” brand, the company’s films and bags are mainly used in the agrochemical and pharmaceutical industries to package products. They are also used to wrap sanitary napkins.

The products have obtained the certifications of Central Institute of Petrochemicals and Engineering Technology, TUV and Splash Test.

Kavitha says GreenPlast’s products are free of toxins and cause no harm to the environment. “Our product variants dissolve in cold, warm, or hot water, and the water can be reused for other purposes except drinking,” she says.

In the future, the company plans to contact e-commerce companies to provide courier bags.

Apart from the Coimbatore-based company, a few other global players such as EAS and H2OK manufacture water-soluble bags.

Kavitha says the strength of her business lies in her in-house manufacturing facility in Coimbatore. The company has a monthly production capacity of 125 tons of granules and 40 tons of bags.

Since the announcement of the nationwide single-use plastic ban on July 1, the market opportunity for alternative products has grown and Kavitha wants to take full advantage of it.

The entrepreneur says his father had made more than 80 different product samples. She plans to test and launch them in the market one by one.

(The story has been updated to correct a typo.)