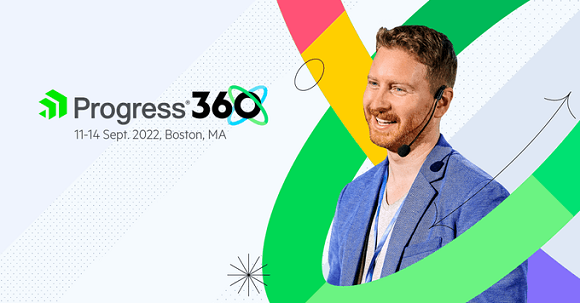 Progress is a flexible company – the organization has seen (arguably) more platform-level development than most enterprise software companies, but in the contemporary era of cloud, data science and the autonomy of the machines, this is perhaps not a bad thing.

But it’s not a pot story of a company’s journey (nowadays the company describes itself as a reliable provider of infrastructure software)it is the focal point on the current situation of the organization in the light of its next Progress360 developer eventwhich will be staged September 11-14, 2022, live from the Westin Waterfront Hotel, Boston, USA, plus virtually anywhere in the world.

The first thing to know about progress is how to say it.

As the Computer Weekly Developer Network team packs up their lobster crackers and embarks on a baked bean detox to prepare for the show, what can we expect from Progress 360 this year in the field?

The last time we were able to attend a Progress Developer Convention was in 2019, so this gathering will no doubt be emotional in a possibly post-pandemic way.

Who should be present?

Progress says it’s a great church, and whether attendees are front-line developers, IT operations personnel, or security professionals (or even an executive decision-maker), attendees will leave Progress360 energized and armed with points. learning useful techniques… okay, someone said ‘too, but you can’t keep the marketing team indefinitely, can you?

It is somewhat of a multi-section event, made up of three key elements: DevReach, ChefConf (Progress has launched its acquisition of Chef in 2020 for his skills in infrastructure automation and configuration management), as well as Progress Executive Forum, an invitation-only mini-symposium for senior business, IT and security executives.

Looking at the first two elements then… Progress said that DevReach is known to be one of the biggest (if not THE biggest) developer conference in Central and Eastern Europe. Now held in the United States for the first time, DevReach brings together industry experts and influencers for hands-on sessions on the latest software application development technologies and best practices.

In a way to ChefConfwhich should also logically now be part of the Progress event family, this section (Editor’s note: you mean dimension, right?) of the event brings together the Chef community and DevOps professionals to dive into innovations and practices in DevOps and DevSecOps, as well as Progress Chef’s full portfolio.

According to Progress, ChefConf is a “true user conference” that ensures attendees get in and out of scheduled sessions, discussions, and breakout sessions equally. There are activities outside of the scheduled sessions with an experience zone, cocktail hours as well as networking opportunities to meet other chefs, customers and contributors.

“Over the past few years, companies in all sectors have evolved considerably. Every business now needs to embrace an innovation mindset to stay competitive, and software infrastructure plays a key role in driving progress,” said Yogesh Gupta, CEO of Progress. “Progress360 will be the event decision makers and tech practitioners want to come to year after year, for access to engaging content, actionable insights, and community connections they can leverage to propel their businesses.”

Gupta will share the stage with other members of the Progress family as well as a number of special speakers.

The AI ​​guy | The Manila Times

The “problem” with low-code (and how to fix it)